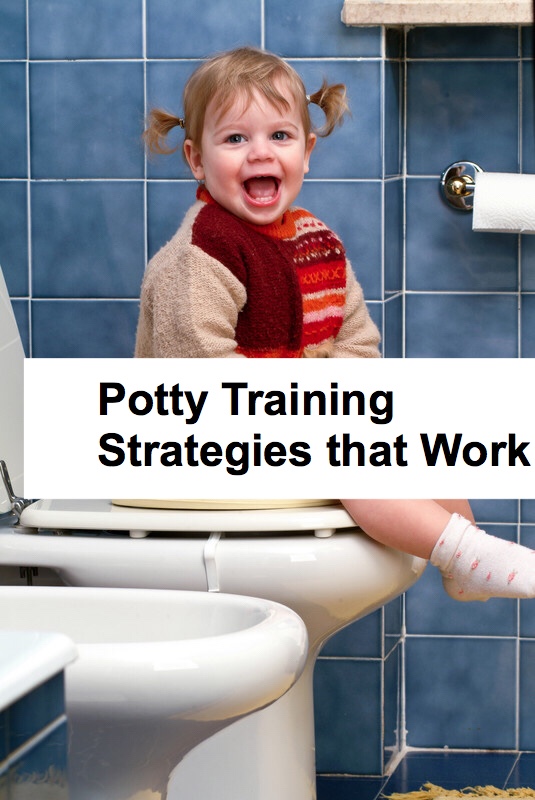 I’m happy to say that Rosebud is potty trained! We have been on quite a journey, but she’s finally got it. We actually started potty training when she was around 18 months old because I bought one of the child sized potties. She learned really quickly what to do. She was staying dry for most of the day plus peeing and pooping in the small potty. Then she came down with a really bad cold and we took a trip to Pensylvania. That ended her interest in the potty. We tried off and on over the next year and a half, but she marches to the beat of her own drum. It became crystal clear that she would do it in her own time and that’s what she did. However, there were a few strategies I used along the way that helped in the potty training process. I’m an early childhood educator, so I know these work with other children as well. You may need to only use a couple of these or combine all of them to work for your children. 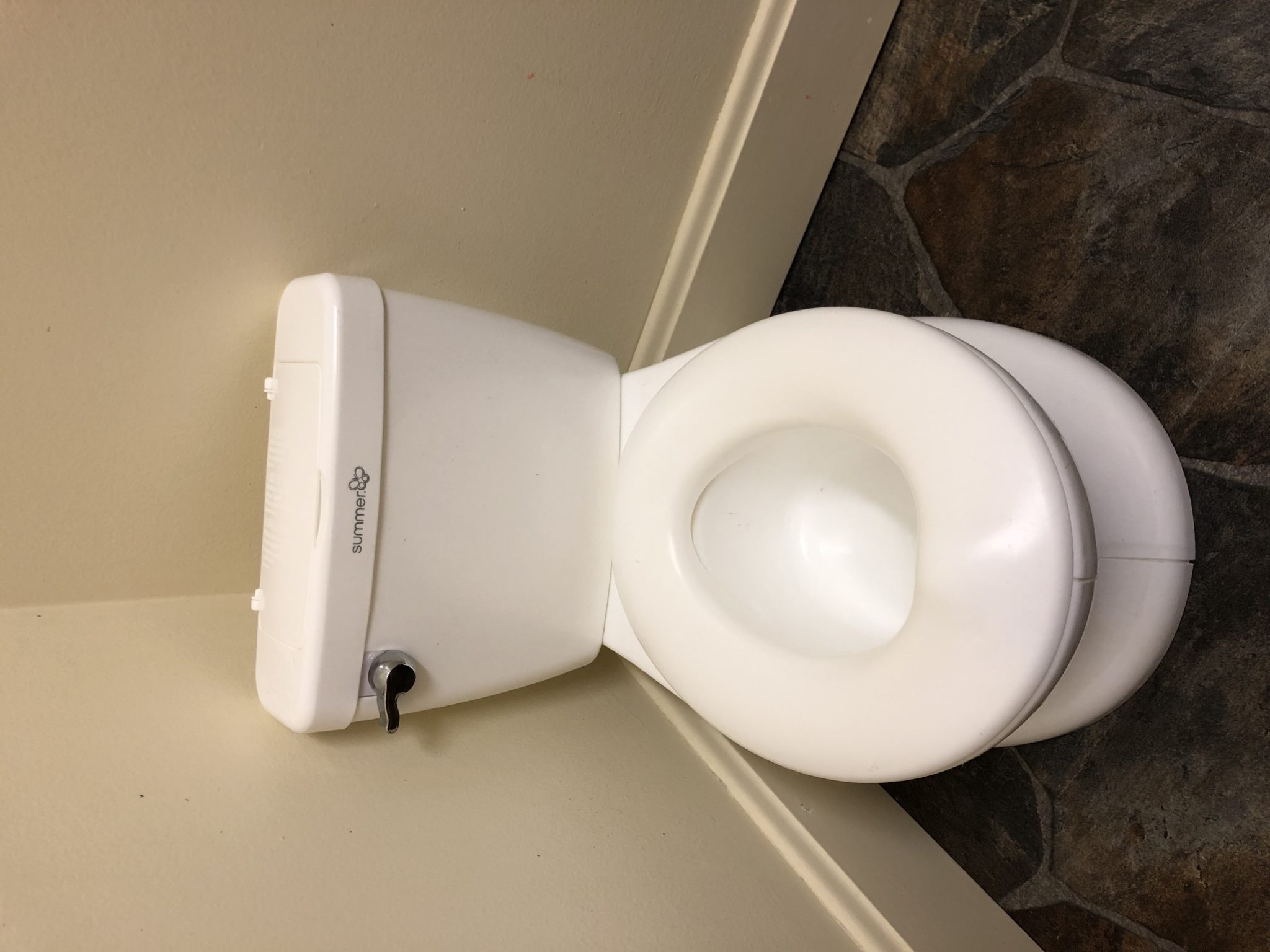 Some people advise against using a child sized potty, but it worked for Rosebud and it has worked for several of the kids I’ve worked with. It especially helps when you are training a child under two. Rosebud was scared of the big potty. When she sat on it, she felt like she was going to fall in and a couple of times, she almost did. I had to hold her up because she couldn’t reach the floor and she wasn’t sure what to hold on to, but once I got the small potty, she was able to relax and focus on peeing or pooping. Some say that it’s harder to transition to the big potty, but in my experience, the kids have wanted to use it when they feel comfortable and are a little bigger. Rosebud still uses the small potty sometimes. She usually uses it when she has to poop because she feels more comfortable, but if it isn’t there, she’ll go on the regular toilet with no problem. If you don’t want to buy the child sized potty, they sell these seats that go over your toilet seat that cover most of the hold so that your child won’t fall. 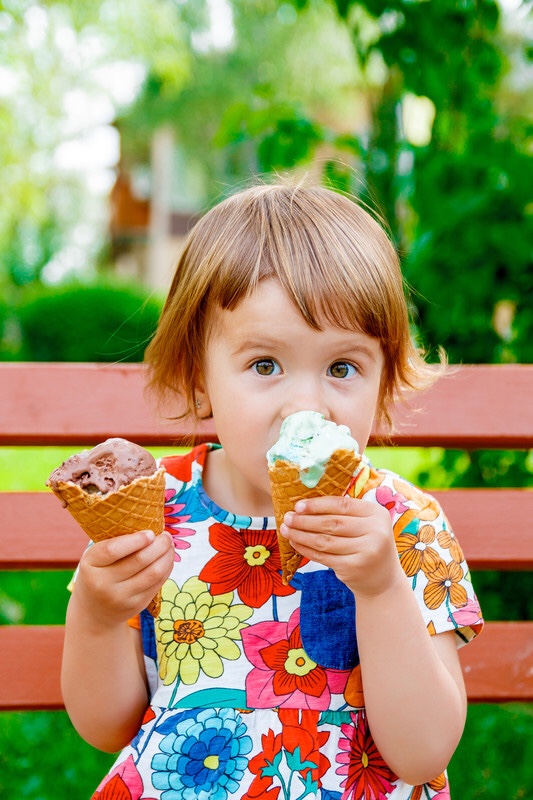 I’m going to say it up front. This did not work at all for Rosebud, but I have seen sticker charts work well for many children over the years. Most children love stickers. In fact, we do this in several classes at the childcare center. For those who don’t know, these charts have a certain amount of spaces that get filled in with stickers. Each time the child uses the potty, they get a sticker. Click here for a variety of free potty training sticker charts. At work, we usually give one sticker for pee and two stickers for poop, but you can decide what would be best for your child. After the chart is filled, the idea is to get a reward. It could be a special treat like an ice cream, a toy or watching a movie. Younger toddlers will care more about the immediate reward of getting the sticker and may not understand the long-term goal of getting a bigger reward. You may want to skip that part and just opt for stickers. However, if your child is a preschooler, he or she will probably understand this concept better. It’s really up to you and what you think is appropriate.

With Rosebud, we might have filled one chart, but she didn’t care about the stickers. They didn’t motivate her at all. I learned that she is internally motivated which will serve her well as an adult. Many of the kids I work with are more motivated externally. Meaning they get their motivation from other people or things in the environment. They love getting the stickers and are so proud to finally get a full sticker chart to show their parents. They want to go on the potty because they’ll know they’ll get a reward. I’d recommend special stickers for this. If your child likes a certain character from movies or tv. Maybe they would like glittery or puffy stickers. Just something out of the ordinary and only used for going on the potty. 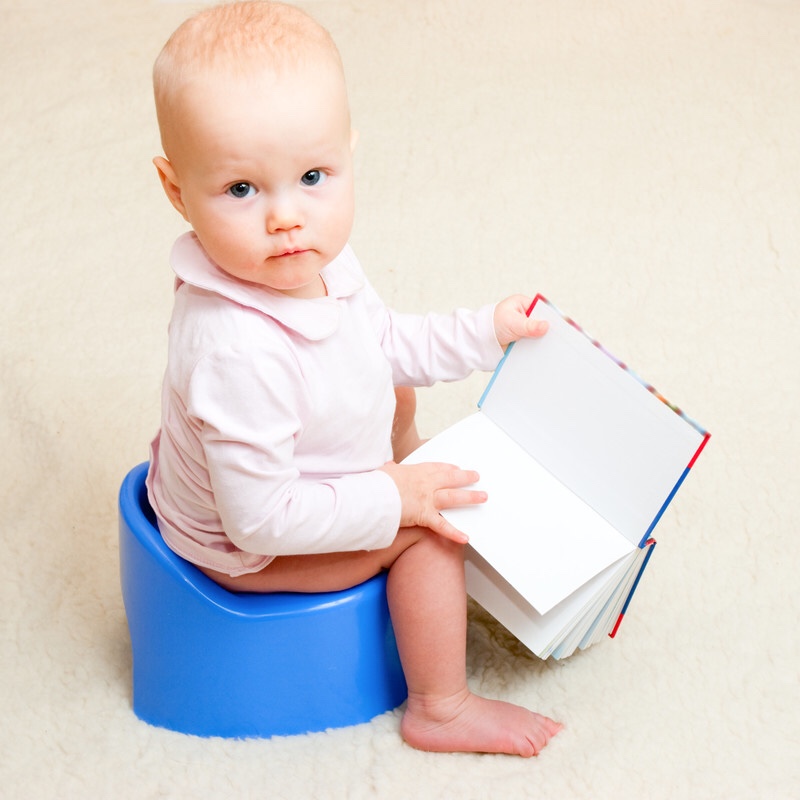 There are books about anything and potty training is no exception. I read a few of these to Rosebud and she seemed to enjoy them. This was one of the things that helped her make the connection. A Potty for Me is a good one. In one of the books, it showed a cat going in the litter box, a dog going potty outside and of course, a baby trying the potty for the first time. Rosebud started making the connection, realizing that Diamond and Mellow used the litter box and we use the toilet. Books are great because they can reinforce the lessons we are teaching and help them make those connections. Books can teach children about their boddies and some of the life skills they need to learn. Daniel Tiger’s Neighborhood coincidentally has an episode about using the potty. We watched that several times as well. If you can get a double wammy with books and tv shows, even better. 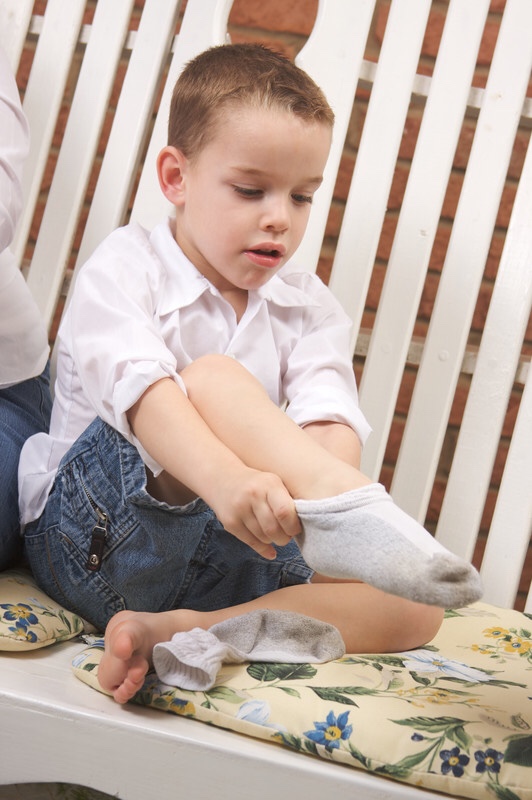 Choosing Their Own Underwear

I took Rosebud to the store and let her pick out her own underwear. She liked the Paw Patrol panties, so that’s usualy what she uses. Since she likes them, she wants to keep them dry. One of the women I work with experienced the same thing. Her granddaughter has Frozen underwear that she picked out. She keeps them dry because she doesn’t want to get the characters wet. If all else fails, have them pick out their own underwear and make a big deal about how special they are. 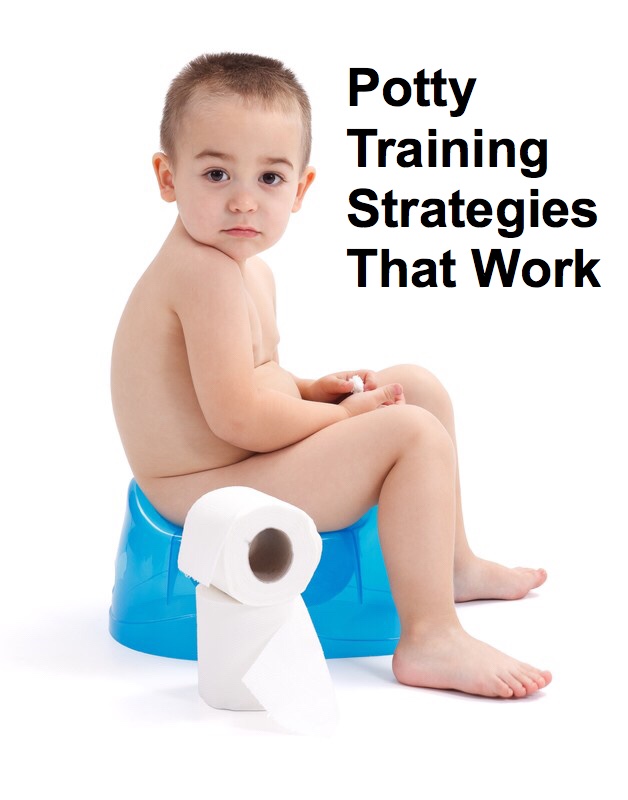 When Rosebud turned three, I decided to try the Three Day Method. It was a huge mistake. I knew there would be a lot of accidents, but many of them seemed deliberate. She’d go pee in the closet or in other random places in the house. She understood what the potty was for, but since the pressure was on, she decided she wasn’t ready. It was a horrible three days. We both only ended up mad at each other, but I learned that less clothes really does help. She did much bettter if she had no pants on or just her underwear. If she had regular pants on, she still had accidents. During your potty training process, I highly recommend letting them be in just their underwear and a shirt while at home. They can easily pull their underwear down and go potty and there will be less washing for you. Also, there won’t be anything there to absorb it so it will be uncomfortable for them if they do go in their underwear. Chances are, they won’t want to do that many times. As a side note, have them help with clean up. They will start to understand that going outside the toilet makes a mess and they will get tired of cleaning up after themselves. 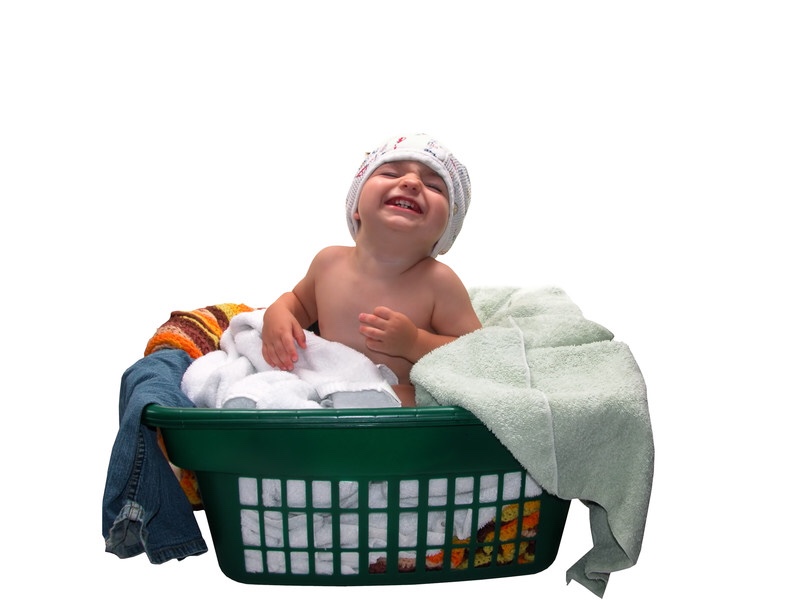 This is my biggest piece of advice. No matter what advice you hear from family and friends, you know your own child. You know if they are ready. If they are ready, it won’t be as much work. They’ll be willing to let go of the diapers. They will understand what the potty is for and be able to control their boddies. Kids have more intuition and understanding than we give them credit for. Rosebud knew when she was ready. She started telling me she needed to go potty. After she stayed dry through the night for about a week, she was the one who said that she only wanted to wear her underwear at night. She said she didn’t need diapers anymore. She’s been staying dry ever since. There were a lot of steps forward and just as many steps back, but we got there. 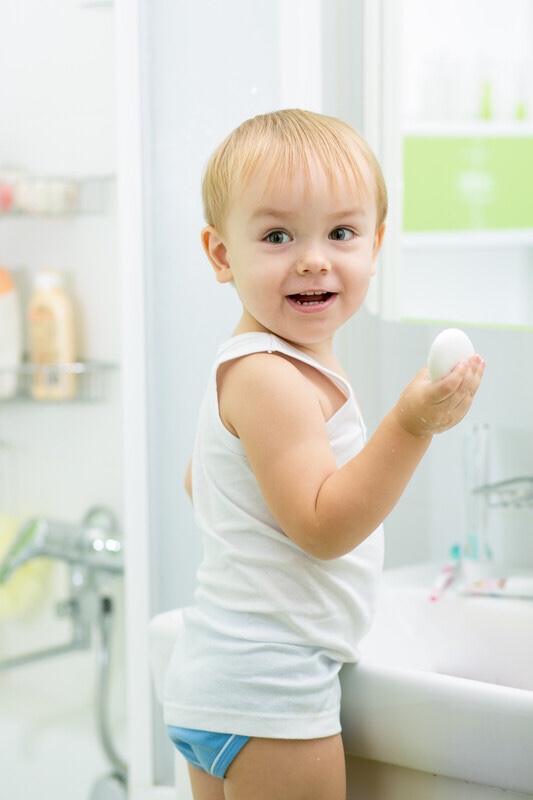 Role modeling is so important. It might sound a little weird, but have your child go potty with you. Since you probably don’t get too many trips to the bathroom alone anyway, they might as well be productive trips. After a while, Rosebud wanted to go on the smaller potty while I used the big one. Kids are happy to be doing anything that grownups are doing.

Put a stool in the bathroom. This is useful for kids to get up on the toilet and they will have something to put their feet on while they are sitting up there. They may feel uncomfortable since their feet can’t touch the ground. Having the stool there can help them balance, allowing them to focus on the task at hand instead of worrying about falling. It’s also useful for hand washing. I put one of these stools in each of my bathrooms. Rosebud loves them.

Finally, try a special toy, book or game that will help them sit on the potty for a few minutes. Sometimes I’d read a book to her, let her bring a small toy or use the Baby Bubbles app on my phone. She’d sit there for two seconds and decide she was done. I needed something that would keep her attention long enough to sit there and try. Eventually you won’t need these extras, but they can be a big help in the beginning.

Remember, that every child is different. They will learn to use the potty eventually. I find that they learn faster and are more likely to stick with it if they don’t feel pressured into it. Go at their pace even when you want to hurry it up. When Rosebud was finally truly ready, it only took a few days. The piece of advice that really matters is to follow your instincts and not to worry about strategies that won’t work for you or when the other children you know were potty trained. In the end, it won’t matter. I hope you’ve found these tips helpful. Good luck with your potty training journey. What potty training strategies have worked well for you? Tell me in the comments.